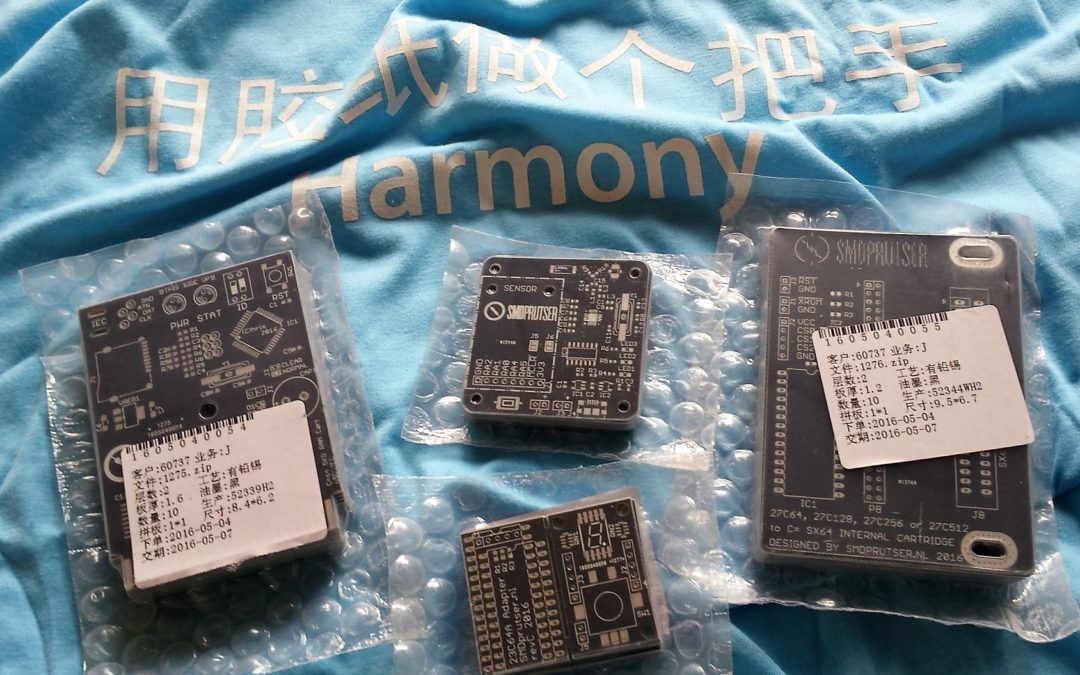 It has been a while that I ordered some PCBs.. I got a bit scared by my own post , so it took a while for sending them in. As usual  I use the DHL option, but as I feared there were custom troubles again. I managed to contact customer service and got it somewhat sorted.

I dit sent in these PCB (re)designs in:

As a child I was facinated with the switches, LEDs and & segment display people built into their Commodores to select a new KERNAL, BASIC or ROM. This adapter converts between the odd (for today standards) pinout and more modern pinout for (EP)ROMs. A breakable PCB gives an adaptor and a display board. The displayboard has a rotary encoder to select between the different ROM pages. The adaptor was featured before and has its own page.

A redesigned PCB (much bigger) of the RAMcart. The old cart had some minor flaws, like a too small footprint for the RAM chip and some forgotten pulldowns. The new design solves that and  adds a new footprint for the uSD socket (push-push instead of a hinge) and software support for programming the RAM (used IO1 area). As more PCB area was available much is just routed in the top layer. The cart was also featured before and has it own page.

As a proud owner of a SX64 I wanted to have an internal cartridge. The SX64 has a convertor board internally to convert a ribbon cable to expansion port. There is plenty of room to extend this board and incoorperate an EPROM. I choose for an EPROM over a SRAM as the battery iome tricky circuitry is used (not proven yet) to detect a cartridge and switch off the internal one. Will see 🙂 Product page will go up soon.

A 5×5 PCB which has a small PIC microcontroller to control a nordic nRF24L01 with onboard chip antenna or external (through an u.fl connector). Onboard are also a 3V3 LDO voltage regulator and LiPo charger. Different sensors can be fitted through a carier board. This is the first iteration and merely a test for this chip and 0402 components. Product page will go up soon.

dangerousprototypes.com was kind enough to include a harmony t-shirt (luckily the blue one :)).